For many people visiting North Georgia one of the more popular pastimes is trout fishing. In the Blue Ridge and Ellijay areas trout streams and rivers abound many of which are in the most beautiful mountain wilderness setting imaginable. These waters challenge beginners and fly fishing experts alike.

The Georgia Wildlife Resources Division regularly stocks many of our creeks and rivers and they have pledged to put more “quality trout” in many popular North Georgia mountain streams. Larger trout are to be a regular part of the mix on all the larger trout streams that the WRD reg 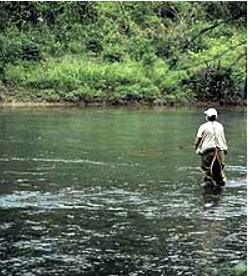 ularly stocks throughout the spring and summer.

“Six to 8 percent of the trout stocked on those streams will be larger fish,” said Lee Keefer, a WRD fisheries biologist who works out of the Lake Burton Hatchery office. “We believe this will kind of spice things up for fishermen — anticipating the possibility of catching some larger trout.”

Many trout fishermen find the Lower Toccoa River which is located below Lake Blue to be one of the best tailwater trout streams in the Southeast. The Tennessee Valley Authority (TVA) is working to maintain minimum water flows which have improved water temperatures, and increase oxygen levels through the summer. It has also made conditions for insect production better.

The Lower Toccoa has some 15 miles of trout waters from Lake Blue Ridge Dam to the Tennessee border much of which is privately owned and access is restricted. However, there are 3 good public access points. Tamen Park, the Curtis Switch Bridge and Horseshoe bend Park offer wading and fairly good access for beginning and ending float trips. By far, the best way to fish the Toccoa is by floating — whether in a canoe, an inflatable pontoon boat or a drift boat.

The Toccoa River is swift and difficult to fish when the water is fully up. It is ideal for wading, float fishing or drift fishing at normal flow. Most anglers consider normal flow level the ideal condition, but generation schedules and anglers’ schedules don’t always line up to allow for fishing during normal flow conditions.. The Toccoa is one of the most heavily stocked rivers in North Georgia, with plenty of rainbow trout, which spread themselves nicely through the river. Anglers also have the chance to catch large wild browns, which reproduce in tributary streams. Most fish are typical 8” to 10”stocker size, but anglers catch quite a few trout up to about 16 inches and occasionally even bigger trophy fish.

With such a healthy trout population the numbers of big trout in the river seem to have increased in recent years. For many anglers the Lower Toccoa was the only river in the area offering a good chance to catch trout due the extreme drought and high water temperatures of 2006 and 2007.

Starts its journey in the Cohutta Wilderness Area and eventually flows into the Coosawattee River. The upper reach of the stream flows through the Cohutta Wildlife Management Area before reaching private land. Depending on the portion of stream you choose to fish, both stocked and native brown and rainbow trout are possible. Although Mountaintown Creek is designated trout water for its entire length, the upper portion of the stream on the Cohutta Wildlife Management Area offers the most unrestricted public access. Wild rainbows up to 12 inches are possible, and the few browns caught will generally run less than 9 inches. The upper portions of Mountaintown Creek have benefited from stream structures constructed and placed by the Georgia Wildlife Resources Division working with Trout Unlimited. These structures have transformed some shallow broad stretches of stream to good holding water. Key species: rainbow trout, brown trout. There is a privately stocked and managed section for fly-fishing only where you can catch an abundance of large rainbow trout. For more information visit our North Georgia Cabin Rental page. See the clickable pictures below.

is the most westerly trout water on public land in Georgia. ]At its core is the 35,268-acre Cohutta Wilderness, located in Fannin, Gilmer, and Murray counties in Georgia and Polk county in Tennessee and managed by the United States Forest Service as part of the Chattahoochee National Forest and Cherokee National Forest. The preserve covers over 95,000 acres and contains approximately 15 miles of the Conasauga river. The waters yield wild rainbow trout and wild browns, with rainbows up to 20 inches and browns to 9 pounds. The managed land is populated by white-tailed deer, wild hogs, black bears, and smaller animals. The only road access to the Conasauga is found via Old GA 2.

Below Blue Ridge Reservoir in Fannin County, Georgia lies the cold, clear waters of the lower Toccoa River. Flowing approximately 18 miles through scenic north Georgia and southeast Tennessee, the Toccoa offers anglers perhaps some of the best year-round trout fishing in the state. Water flow in this tailrace fishery is greatly influenced by operations at Blue Ridge dam. Since water flows can become treacherous rapidly, fisherman should check TVAs daily- automated generation schedule (ph# 1-800-238-2264) for the dam before heading out on the river. The river is floatable by canoe, tube, or small boat and wadeable at a number of locales. Popular access points include Tammen Park immediately below Blue Ridge dam, several road crossings, a TVA public access point downstream of Curtis Switch Rd., Horseshoe Bend Park and a concrete boat ramp in McCaysville, Georgia.

Trout account for nearly ¾ of the game fish population of the lower Toccoa River. The WRD stocks the Toccoa annually with rainbow and brown trout adults and fingerlings. However, this is anything but your typical stocker trout stream. The system supports some natural reproduction and trout survive year-round in the river and its tributaries. These wild and holdover fish offer anglers trout exhibiting natural behavior and fine table fare. Trout of both species average around 9 inches, but plenty of 12-16 inch fish and an occasional 20+ inch bruiser can be hooked in the river. Trout can be taken with spinners, live bait and flies throughout the river. Fly-fisherman have come to find the lower Toccoa as a dry fly enthusiasts dream, but wet flies and streamers have their place, especially in the winter months.

Runs though USFS Land for much of its length and offers a good mix of both the easy and difficult brands of Georgia trout fishing. Coopers is a tributary to the Toccoa River. Except the lowermost segment and one other small area, the creek flows over lands of the Chattahoochee National Forest. Cooper Creek provides something for everyone, no matter what style of trout fishing you prefer. Sections of the creek are heavily stocked the farther you go up stream, access becomes much more difficult. Both stocked and native trout are possible here. The small tributaries to Cooper Creek also provide trout fishing opportunities.

is the premiere stream of the Blue Ridge Wildlife Management Area in Fannin County. Access to the creek is excellent, with almost the entire watershed on public land. From its headwaters near Winding Stair Gap, Noontootla Creek flows northward through the lands of the Chattahoochee National Forest and Blue Ridge Wildlife Management Area. Although the stream’s lower half is mostly on private land, the upper half and its tributaries offer plenty of public owned opportunities for trophy trout fishing. Since no stockings have taken place since the mid-1960s, all the fish caught will be stream-bred brown and rainbow trout. Native brook trout may be possible in the extreme headwaters of small tributaries, but the browns and rainbows are what draw anglers to the stream.

Originates off the eastern slopes of the Cohutta Mountains in Gilmer County. Winding through western Fannin County is a tributary of the Ocoee River (known as the Toccoa in Georgia). It is the one of the largest creeks in Fannin County and is privately stocked in several places. It traverses mostly through private land but there are plenty of cabins both for sale and rent along it’s banks. 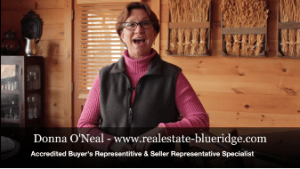